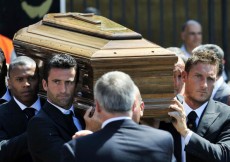 The coffin of the AS Roma football club president Franco Sensi is carried out by his players, captain Francesco Totti (R) and Christian Panucci (2nd L) and new player, Brazilian forward Julio Baptista, at Basilica of San Lorenzo in Rome on August 20, 2008. Sensi, 82, who had been in charge of the Rome club since 1993, passed away in a city hospital on August 17. He oversaw a successful period for the club on and off the field, with Roma winning two Italian Cups (2006-08) and a first division league championship in season 2000-01. Franco Sensi has died after a lung illness. AFP PHOTO / Andreas Solaro (Photo credit should read ANDREAS SOLARO/AFP/Getty Images)