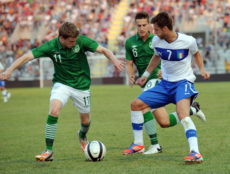 LECCE, ITALY – SEPTEMBER 10: Eman O’Kane of Republic of Ireland and Jacopo Sala (R) of Italy compete for the ball during the UEFA Under-21 Championship qualifying round match between Italy and Republic of Ireland on September 10, 2012 in Casarano near Lecce, Italy. (Photo by Giuseppe Bellini/Getty Images)