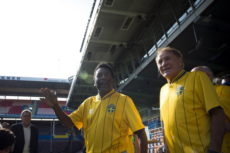 Former Brazilian football players Jose Altafini, aka Mazzola (R ) and Edison Arantes do Nascimento, aka Pele enter the Rasunda stadium in Solna near Stockholm on August 14, 2012. The Swedish national team will meet Brazil on August 15 for a friendly match which will be the last one to be played at the Rasunda stadium before they move all the Stockholm games to the new “Friends Arena” on October 2012. AFP PHOTO/JONATHAN NACKSTRAND (Photo credit should read JONATHAN NACKSTRAND/AFP/GettyImages)